I beg to move that leave be given to bring in a Bill to introduce a positive duty to promote equality between women and men in the public sector.

Such a duty was introduced for race discrimination in the Race Relations Amendment Act 2000. The Audit Commission has since described it as the key driver for change in combating the discrimination which still exists against our black and ethnic minority communities. Likewise, the draft Disability Bill also contains a positive duty on the public sector to promote equality and rightly so.

It is now time for the same advance to be made for women and men. My Bill will accomplish this.
The Sex Discrimination Act 1976 outlaws discrimination between women and men in the workplace and in the provision of goods and services. It was pioneering legislation twenty eight years ago when the incomprable Barbara Castle put it onto the statute book. Her vision and determination put Britain in the forefront of the battle for equal opportunities then and key advances were made. However, the Act does not prevent discrimination from happening in the first place. Rather, it provides redress and compensation to those who experience it after the event. So only those who are determined enough to endure the stresses and strains of a legal process and the threat of losing their job or incurring high legal costs get the chance of recompense. And cases can take many years to resolve. The result is that women are still sacked for being pregnant and men are penalised at work for taking on caring responsibilities. In Britain today much illegal discrimination is left unchallenged and unchecked.

The positive duty to promote equality will address this problem by shifting the onus to end discrimination from the individuals who suffer it to the public bodies which provide vital services to all of us and employ many millions of us to deliver them. The duty to promote will close many of these practical loopholes in the law and make the fight against unfairness and blighted life chances much more effective. This is a change which is long overdue.

Make no mistake, there is still much to do.

Recent figures have confirmed that the pay gap between women and men is stubbornly persistent at an average of 18%. . The public sector is generally better than the private sector. For example the gap stands at 13% in healthcare. But in banking and public relations it is a staggering 56% and widening.
The causes are well documented. Women’s lack of access to bonuses, overtime and opportunities for promotion is significant. Childcare and other caring responsibilities often leave women with little choice but to work part time where pay and conditions are inferior to those available in the full time labour market. This often leads to men having to work even longer hours to make up the family income. British men currently work the longest hours in Europe which is not good for family life.

At work, women are still concentrated overwhelmingly in low paid occupations and can expect to retire after a lifetime of hard work on a pension income which is just half that of their male counterparts. Once more this situation is not improving.

The Equal Opportunities Commission, which supports this Bill, recently conducted an inquiry into job segregation by gender. They looked at five areas, construction, engineering, plumbing, information technology and childcare. Four of these sectors have a heavily male workforce and major skills shortages and one has a largely female workforce and low pay. 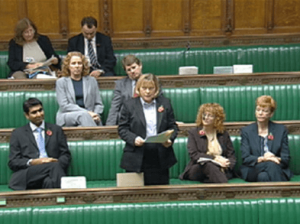 They discovered that the Government’s modern apprenticeship scheme is actually reinforcing rather than challenging this gender segregation. There has been no increase in women coming into the four male dominated areas in the last ten years. For example women make up only 1% of those currently working in construction, yet only 1% of modern apprentices in construction are women. 8% of those working in engineering are women yet only 6% of modern apprenticeships in engineering are held by women. In childcare, despite the prospect of the creation of 150,000 new jobs in the sector men are almost completely absent and pay remains very low. A man who wishes to have a career in childcare is still considered mildly eccentric or worse. Overall, 95 % of apprenticeships in engineering and construction are held by men who are earning £115 a week. In social care by contrast 89% of apprenticeships are taken by women who are earning just £60 a week.

Once the positive duty to promote equality is enshrined in law it is inconceivable that this lack of progress in tacking job segregation can be allowed to continue. And the role of the modern apprenticeship scheme in reinforcing it further would have to end. Banishing this gender job segregation would offer women more choices and higher earnings opportunities as well as addressing skill shortages and boosting our economic efficiency. It would offer men more civilised choices about their work life balance.

The duty to promote can also be a lever to ensure that public services are redesigned to reflect the life experiences of women and men more effectively too.

Men are much less likely than women to visit their GPs in a timely fashion and so they only go to the doctors when their illnesses are at a later stage. Primary health services need to be redesigned to encourage men to seek help earlier.

Women rely on public transport much more than men as they have less access to private cars. They also have different patterns of usage combining trips to shops, taking children to school or childminders as well as going to work themselves. This is a much more complex set of journeys yet bus routes and ticketing are often designed with simple commuting to work in mind.

Mr Speaker I could go on providing many similar examples of the scope for improving the design and delivery of public services to meet the needs of women and men more effectively. This can only improve efficiency and value for money.

There are those who will argue that the positive duty to promote will just be a bureaucratic nightmare which will have no effect on improving fairness or efficiency. These criticisms are usually made by people who do not wish our equality laws to be effective or modernised. In reality, introducing a new requirement to promote equality in the public sector, can be delivered as part of the core planning inside the organisation. It should lead to greater equity and a more effective use of existing resources.

It need not introduce extra complexity, expense or endless paper trails. But it should encourage strategic analysis which results in much more user focused provision.

In due course, I believe that it is only right to extend these positive duties to prevent discrimination and promote equality to the private sector too. There is no reason why the efficiency and equity gains they deliver should not benefit the whole economy and all of our population.

Mr Speaker, this Bill could be a small part of a third term Labour agenda to simplify, harmonise and extend equality protection to all.

This would make our law simple to understand and use for employers, employees and service providers alike.
It would make protection from illegal discrimination a reality for all, and finish the work so ably begun by Barbara Castle by extending fairness and opportunity further than ever before.

I beg to move.